Playing ice-hockey you can always make any needed plan of the ice hockey field mentioning the positions of the players for planning the next game and so to be able to discuss the fails of the previous ones.

There are three zones within the ice hockey rink, such as those divided by the blue lines. There is a central zone, known to be called the “neutral one” or “centre ice”. The common term for the outer zones is for them to be called the “end zones”, being more commonly referred to by terms, which are relative to each of the team. The end zone is the one in which an ice hockey team is trying to score – it is the attacking zone. Sometimes the attacking zone is also called as the “offensive zone”. The end zone, in which each team's goal net is located, is called the defending zone. Sometimes the defending zone is also known to be called as the “defensive zone”.

There are lots of different tactics of how to an play ice-hockey game, such as a defensive play called “forecheck”, which is made in the offensive zone with the goal of applying the pressure to the opposing team for regaining the control of the puck itself. The process of forechecking is usually executed in one of these three situations: 1) it can be a recovery of the puck after a so-called “dump in”, 2) a recovery of the puck after the rebound on a scoring attempt, 3) a recovery of the puck immediately after a turnover for regaining the possession. Forechecking can be either conservative or aggressive, depending on the coaching style. It always also depends on the skating skills of the players. The aggressive forechecking strategies are more often used by the ice hockey players who have good skating mobility. At the same time the conservative plays such as the “neutral zone trap” are always better to use for such ice hockey players who have not as much agility.

Another play is known to be called as the “2-1-2 forecheck”. The mentioned ice hockey forechecking strategy uses the two forwards deep in the offensive zone, with the remaining forward positioned high in the offensive zone. There are two defencemen positioned at the highest part of the mentioned zone near the blue line, so this forecheck can be used to apply both physical and mental pressure on the opposing team. The needed skills are necessary for trying to move the puck out of their defensive zone with a goal of forcing a turnover keeping in mind. The positioning of the ice hockey players removes options for moving the puck all along the boards, resulting into forcing the play to the middle.

The fourth skater which can be found in the offensive zone is known to be called a defenceman, who is high in the zone only in case the possession of the puck is not lost. In case it happens, then it is defenceman's responsibility to skate hard towards the puck and so to get it back to the first forward or to the second forward. The described situation is known to be called as the process of "pinching the wide rim."

The last, the fifth skater in the zone is the one remaining the defenceman. He also is known to be staying high in the zone, supporting the side without the puck. The mentioned without the puck is known to be called as the “weak side”. Thus, in case the puck is sent to the other side, then the ice hockey player who is known to be remaining the defenceman can pinch the rim in order to get it back to the first forwarder or to the second forwarder. Later, the defenceman can cover the high point of the weak side and both him and who remains him become the second "2" in the “2-1-2 forecheck” situation. The mentioned system of forechecking expects the skaters to be good enough to succeed.

A combination of the "Ice Hockey Rinks" and "Ice Hockey Positions" libraries gives you an ability to create a ice-hockey-related drawing in seconds. Follow next steps to create you own ice hockey schema: 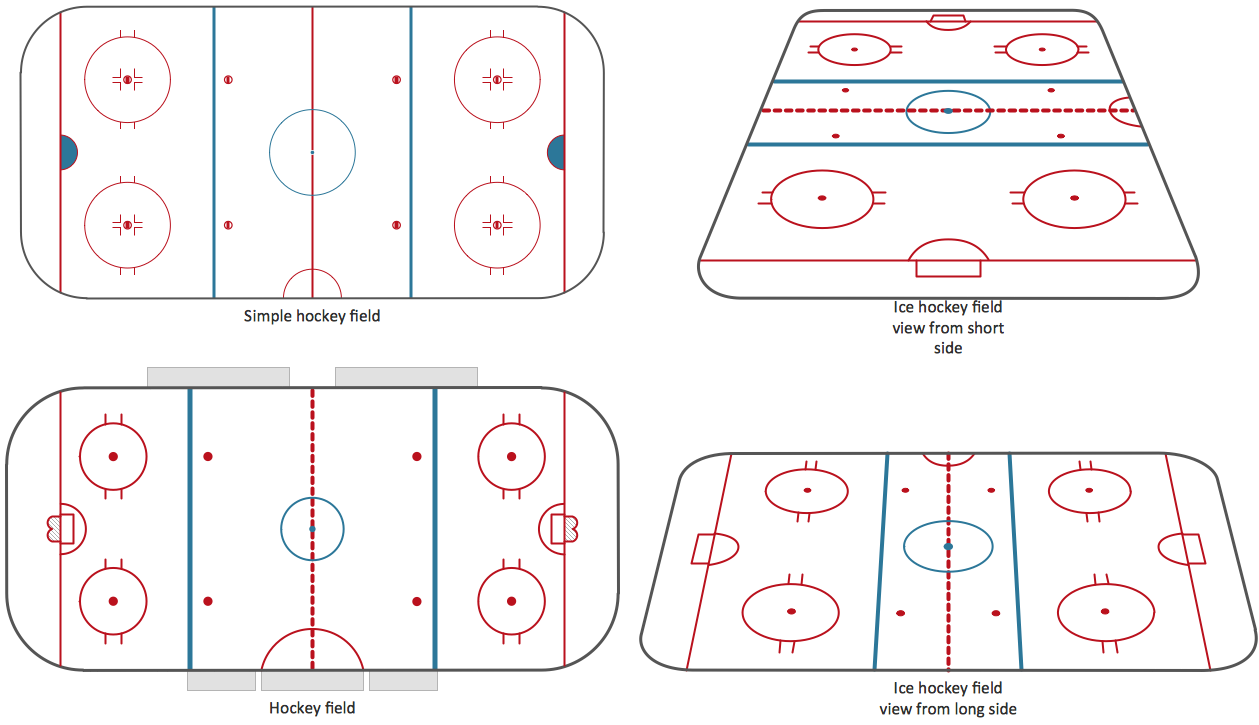 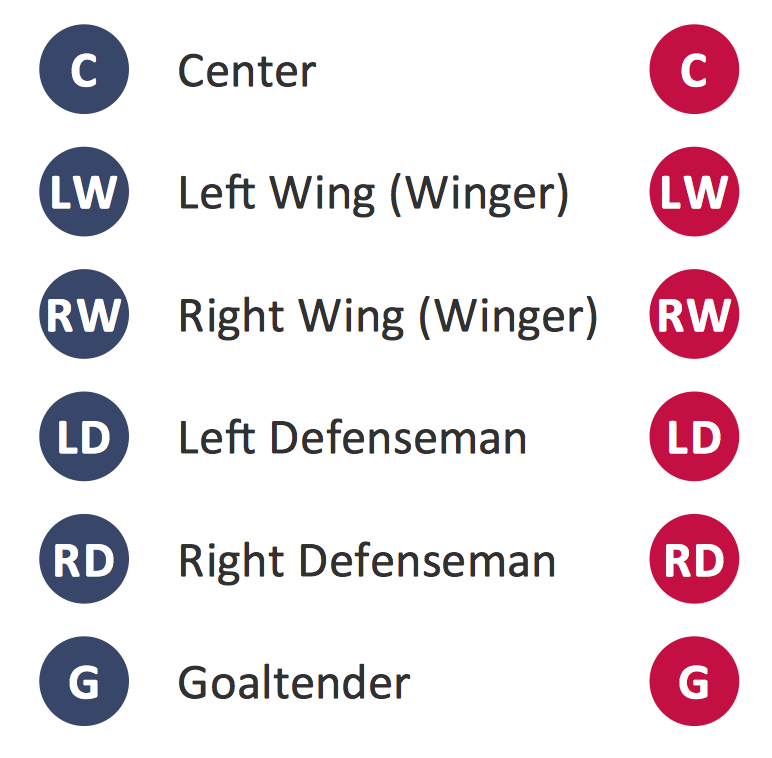 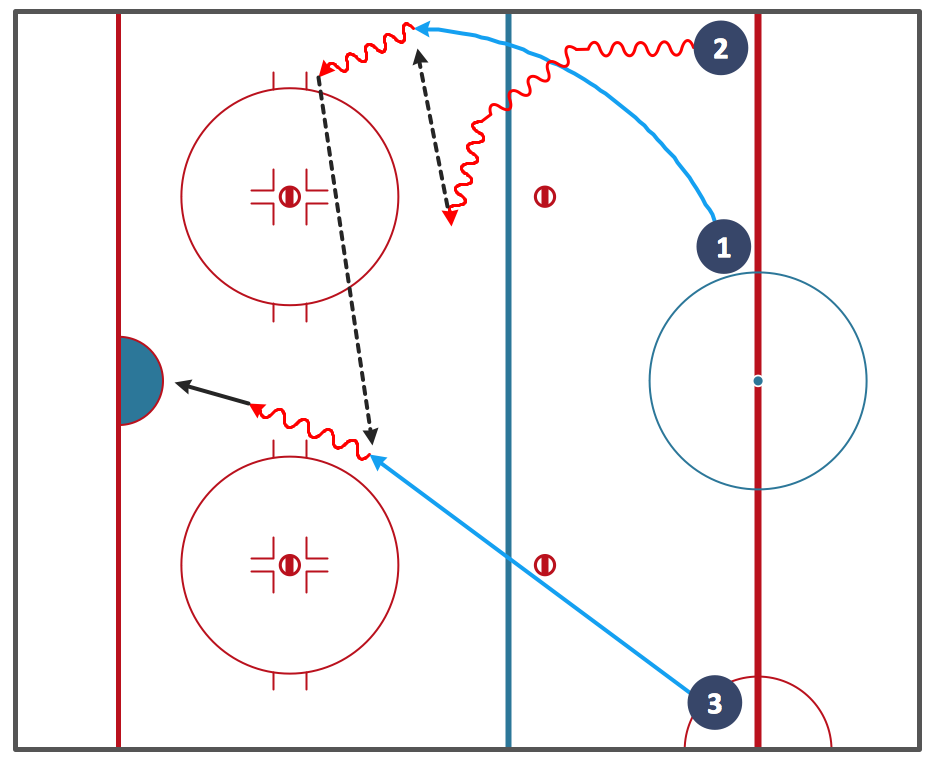 As it was already mentioned, you can always represent the described positions of the ice hockey players as well as the zones, used in the game of ice hockey in a way of making a great looking drawing, mentioning both the players and so their positions within the ice hockey rink as long as you have ConceptDraw DIAGRAM drawing software. Thus, any ice hockey related drawings can be always simply made within only a few minutes using all the needed tools, such as design elements and the pre-made templates of such sport filed plans to edit.

Explaining basics of Baseball is practically impossible without drawing a diagram. If you need to do this more than once you have to choose an appropriate tool allows you to change diagrams easily. ConceptDraw DIAGRAM extended with the Baseball Solution is the best choice for this case. 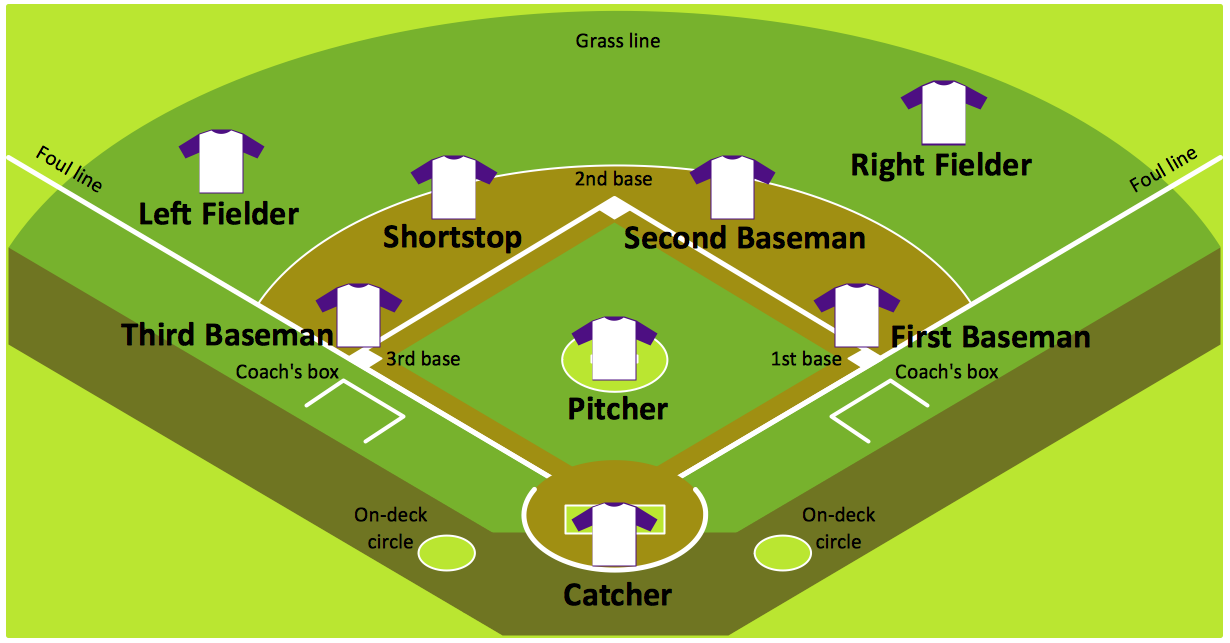 Producing football diagrams using ConceptDraw DIAGRAM software takes seconds, not minutes. Thanks to Football solution from the Sport area of ConceptDraw Solution Park all you need is just drag and drop ready-to-use positions objects to a template contains football field, and place positions on the field. 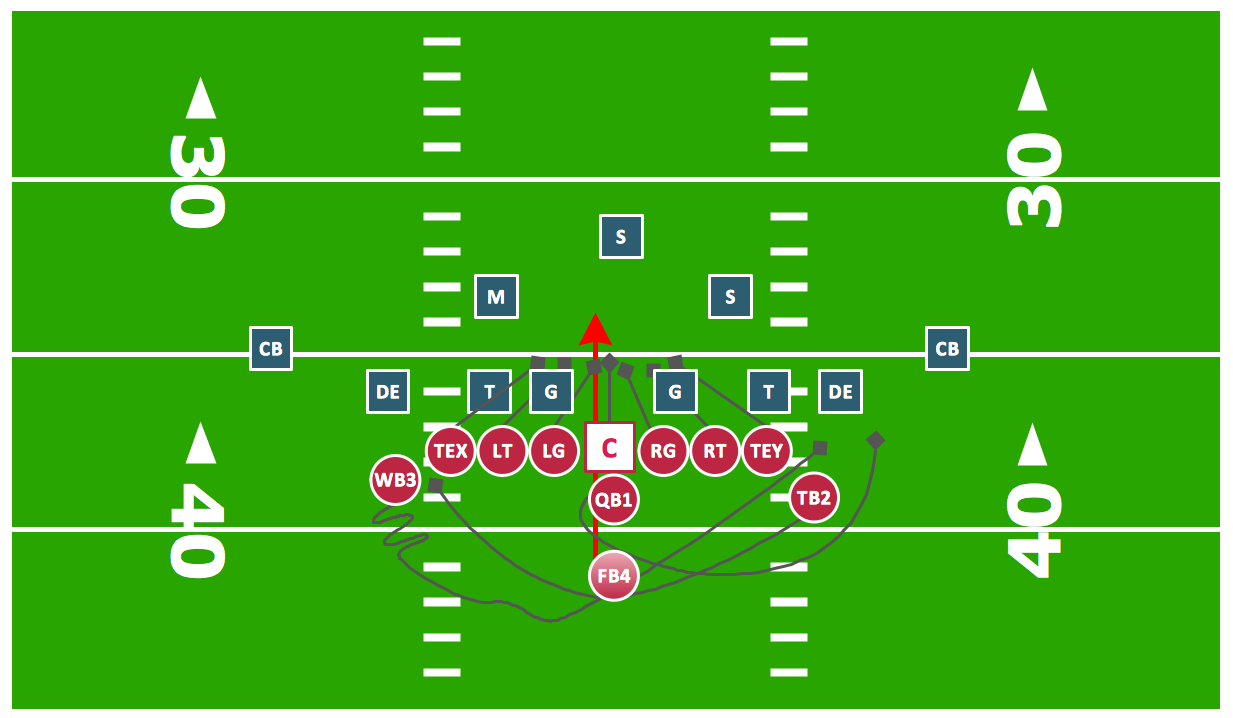 Basketball Field in the Vector →

The Basketball Field library from the Basketball solution provides a complete set of ready-to-use predesigned vector courts: horizontally and vertically located, whole and half of court, colored and not, courts with views from different sides. All courts objects are designed according to the real basketball courts dimensions. Simply drop the needed basketball field in the vector from the library to design your own basketball diagram. 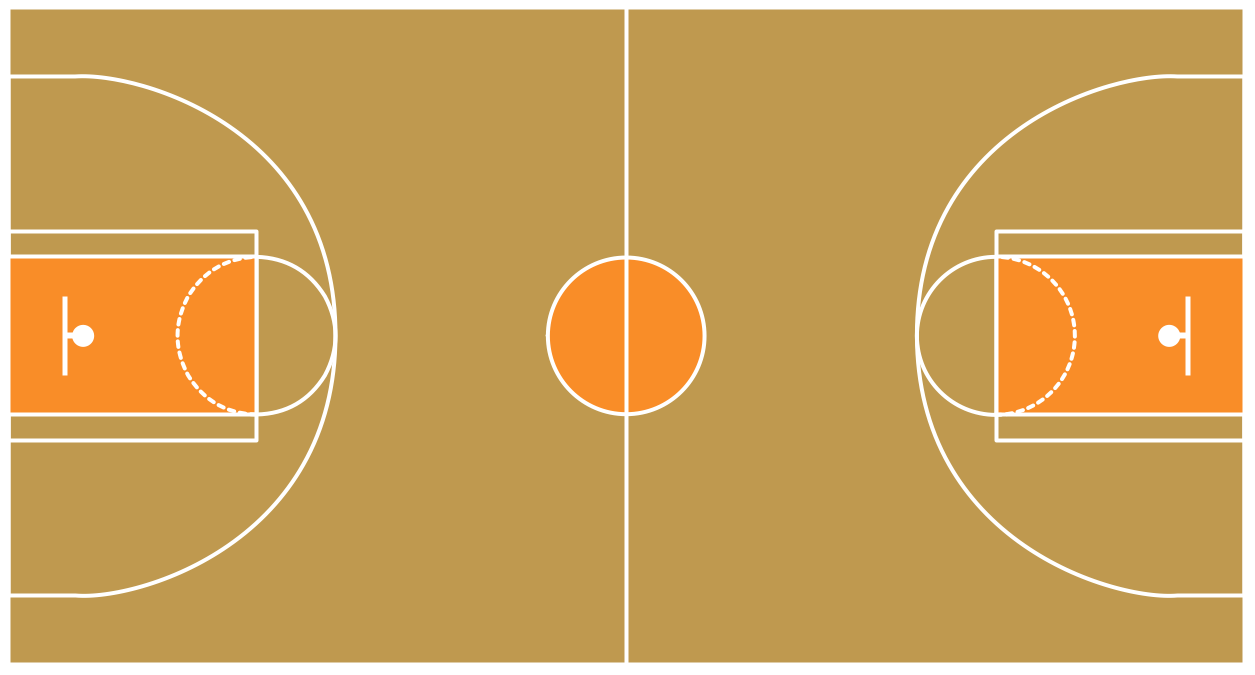 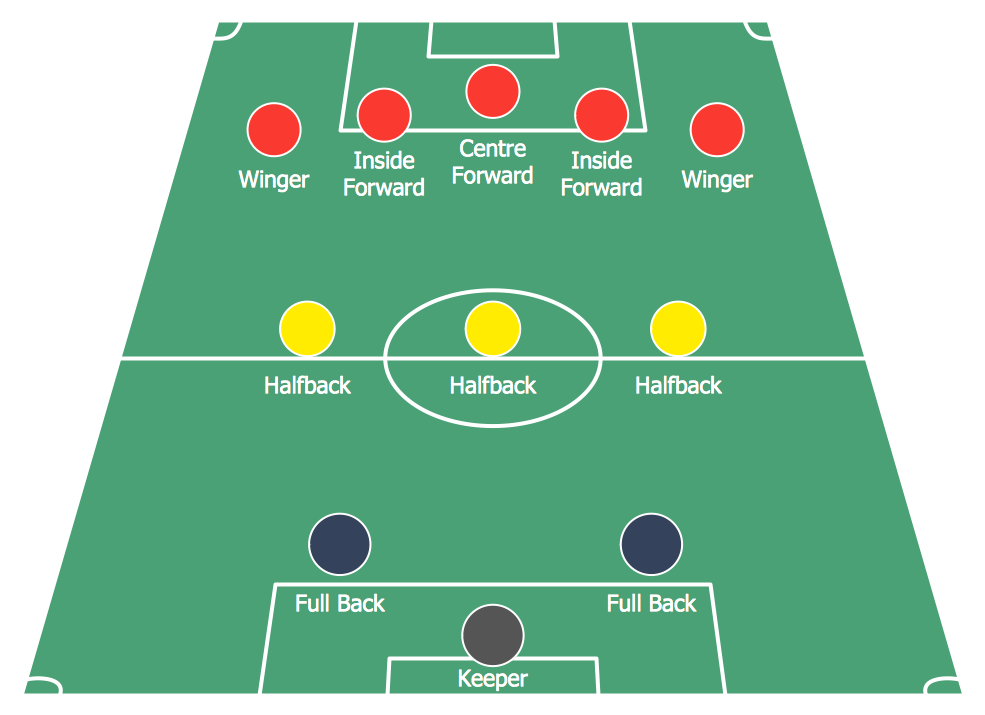 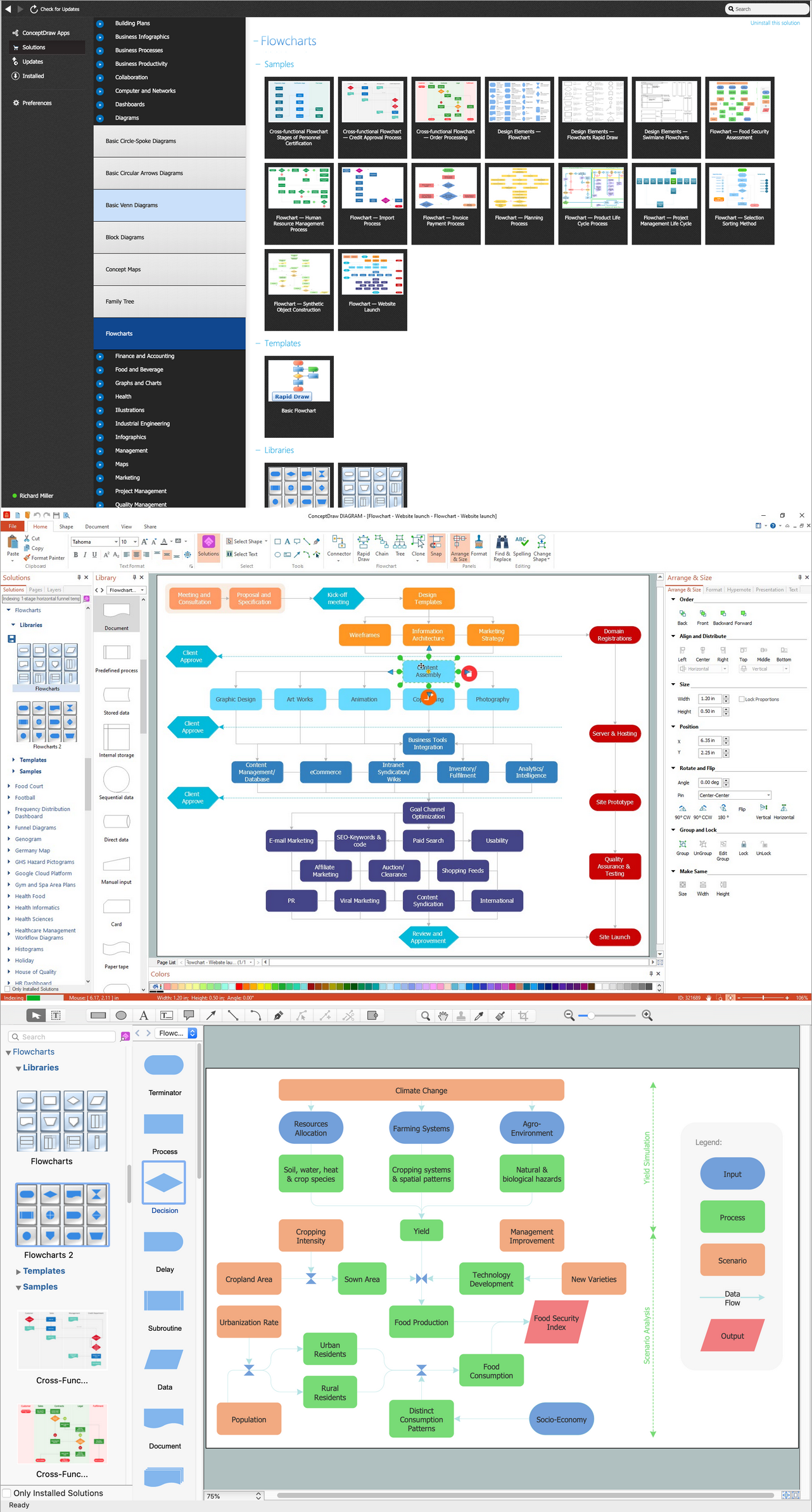